Since the arrival of the iPhone in July of 2007, the number of smartphones available to consumers has grown enormously as handset makers struggle to compete with each other and Steve Job’s latest creations. This surge in availability and variety among mobile devices has undoubtedly benefited the consumer in the form of lower prices and wider choice. Chitika has been intrigued by the changing mobile market and the impact of smartphones. To that end, we conducted a device breakdown by carrier to shed light on some of the most popular smartphones, and how carrying certain devices like the iPhone can influence a carrier’s market share. 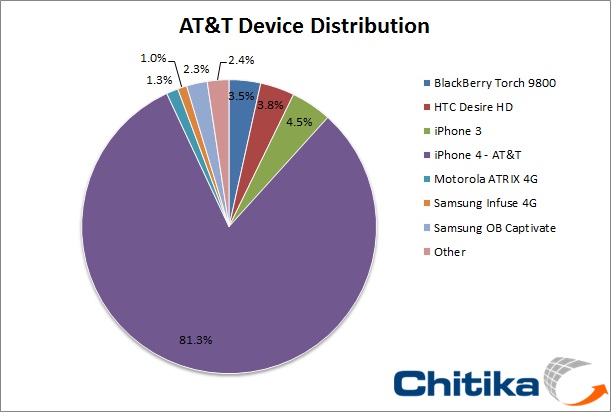 AT&T is the largest cellphone carrier in the US and was the first company to carry the iPhone 4. The iPhone represents a total of 81% of smartphone web use on the network, with the remaining market share made up by a number of devices. The iPhone’s overwhelming presence on AT&T can possibly be attributed to the network’s early adopter status, extensive advertising campaigns, and the relative unavailability of other smartphones until recently.

Clearly, the iPhone share on Verizon is much smaller (33%). We suspect a major reason for its smaller share is its late availability; the iPhone 4 only became available for Verizon in January 2011. In addition, the Android OS gained early acceptance with Verizon, leading Android phones to currently comprise 46% of the Verizon market (this includes phones such as the Droid X and the HTC Incredible). This perhaps provides some insight as to Verizon’s wider device distribution, as well as the iPhone’s lower success rate with this provider, notwithstanding its impressive growth. 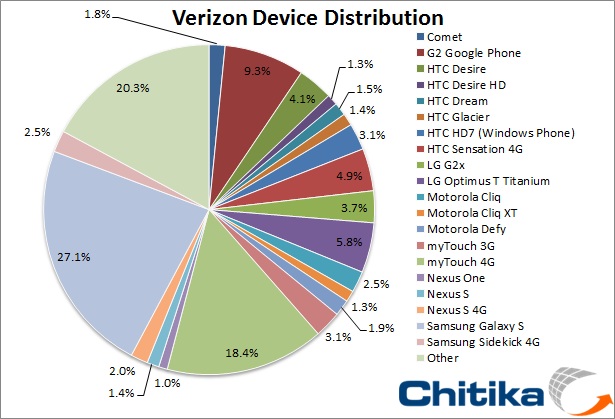 Like many things in business, taking first place is often what leads a company to take the cake. The iPhone’s first brush with success on AT&T can potentially be attributed to the fact that it was at the forefront of the smartphone revolution. The question now becomes: what happens when you’re second to hop on the train? It will be interesting to see whether the iPhone becomes a majority leader on Verizon, or because of its late entrance, if it remains hindered by Android’s significant market share. Chitika Insights will continue to monitor the iPhone’s penetration into the Verizon market. Please stay tuned.

If you’re looking for a way to get your voice heard, Poll the People is the perfect platform for you. We offer a free signup so you can test our platform and see how easy it is to use. With our easy-to-use interface, you can create polls and surveys to get the feedback you need from your customers. So what are you waiting for? Sign up today and get started!

Firefox 6 Takes Off, up to Over 8% of Traffic