Google’s Android is a dominant force in the mobile Operating System (OS) market but it’s not without its challenges. The same versatility that draws in many developers leads to one of Androids greatest difficulties: fragmentation. Android is currently used by a range of manufacturers on a multitude of devices, each having different update schedules and processes. Rapid releases of updated Android versions leading to increased fragmentation has been among the main reasons new Android OS versions have failed to quickly gain traction in the Android market.

With Android’s latest update, Jelly Bean, starting to roll out, Chitika Insights is interested in investigating the current level of fragmentation we are seeing in the Android market since our last report in March. We had found that after three months on the market, Ice Cream Sandwich was generating only 1.54% of all Android web traffic. This posed a stark contrast to Apple’s mobile Operating System, iOS (Android’s biggest competitor), where over 90% of iOS users were operating on the latest two versions, compared to 4.5% of users on Android 3.0 and 4.0 combined.

To quantify our latest study, Chitika Insights analyzed a sample of tens of millions of mobile ad impressions all running some version of Android OS, spanning a one week time frame, from July 3 – July 9, 2012. Web market share is composed by calculating the proportion of Android impressions represented by each version of the operating system. The resulting distribution shows the current levels of fragmentation within the Android market. 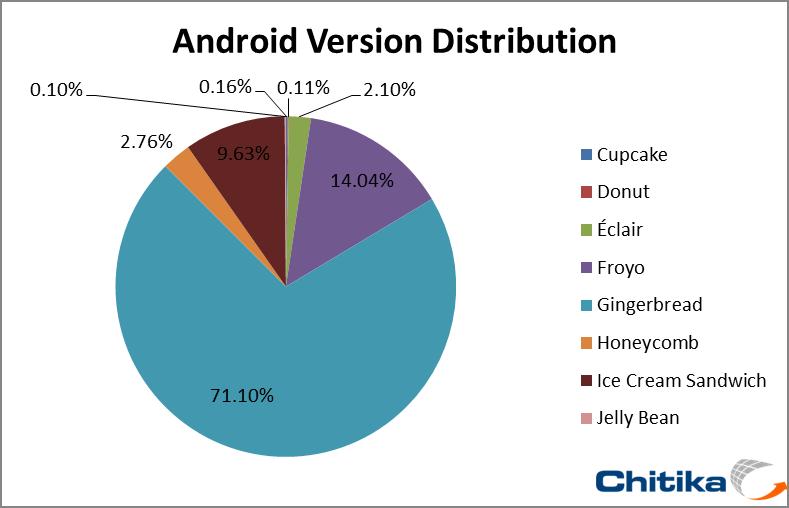 As we found in our previous report, Ginger Bread still takes the greatest share of the Android market with 71.1%, up slightly from 69.01% in March. Available since December 2010, Gingerbread’s features like on-screen keyboard, power and application management, speed and efficiency, have helped in maintaining the top spot. However, Ice Cream Sandwich (ICS) is chipping away at the market with a 9.63% share – a significant jump from 1.54%, seen in our last report.

So what’s the reason behind the surge in share for ICS? Google recently reported that ICS is now running on one in ten Android devices and sales for the newly launched Samsung Galaxy S III and HTC’s One X (both running ICS) have been stellar. The Samsung Galaxy Tab 2 – also running ICS – has fared well in the tablet market, coming in second place among top tablets in the market behind the dominant iPad.

The growth seen for the latest version of Android’s OS may be halted with the recent release of Jelly Bean (4.1), announced on July 11. Said to have many new improvements for the user experience, Jelly Bean is now available as an update on the HSPA+ Galaxy Nexus and will be available on the new Nexus 7 tablet.

The current levels of fragmentation, in addition to yet another update making its way into the market, may cause more problems for developers struggling to create applications supported across all versions of the Android OS. Furthermore, given Android is open-source, older versions of the OS are still used in new Tablets and mobile devices and are not providing users with the latest and greatest updates and features available today – a source of confusion and frustration for consumers. Despite issues with fragmentation, Android’s OS is still a force in the mobile market. The latest data from Chitika Insights Internet Access Platform Tracker shows Android has a 46.8% share of smartphone traffic, just behind iOS with 49.9%. 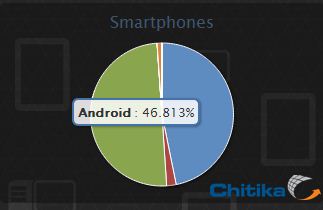 We will continue to monitor and report news on the Android market as Jelly Bean continues to roll out.