Ice Cream Sandwich, the most recent dessert themed version of the Android Operating System (OS), was made available to the public on November 12th, 2011. It is unlike any Android OS before it, in that it incorporates aspects of Gingerbread and Honeycomb into a single version that can run on both tablets and smartphones. However, due to delay, it wasn’t until much later (on December 15th) that the OS saw its first real foray into the markets on the Samsung Galaxy Nexus. Google also ran into some trouble rolling out the update to Samsung Nexus S owners, whom experienced difficulties when over-the-air upgrades failed to install correctly. For those of you looking to upgrade, most Android phones and tablets released in 2012 will be running ICS, though there is no official word as to when earlier purchased Android phones will be given the option to upgrade.

I’ll be the first to say it (as I’ve stated in the past): Android’s open nature has allowed the OS to permeate the smart phone market to the point where it is now responsible for over half of all mobile web usage and is now giving Apple a serious run for its money. Openness can be a double edged sword in that software consistency can be difficult to maintain and enforce across all mobile devices. In turn, it can also can act as a road block in terms of ensuring that as many mobile devices as possible are running on the most up to date version. Android is notorious for wide version fragmentation across the broad range of devices on which it operates. This unique combination of advantages and hindrances prompted a Chitika Insights study focusing on web activity seen by Ice Cream Sandwich, relative to other Android versions, to determine its current level of market permeation.

To quantify this study, Chitika Insights analyzed a sample made up of hundreds of millions of mobile ad impressions, spanning a one week time frame, from January 5th to the 11th. Web market share is composed by aggregating total mobile impressions over the given time range, and then calculating the distribution of impressions using each mobile OS. In this study, where one version of Android is compared to the OS as a whole, we only use impressions where Android is the OS. The data from this study can be viewed in the graph below: 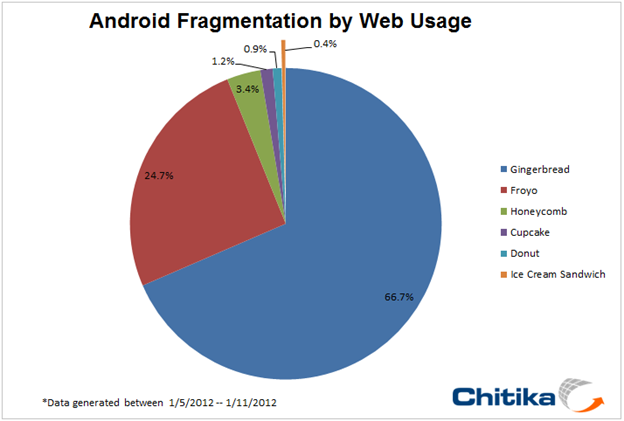 Over the time period studied, Ice Cream Sandwich generated the smallest portion (0.4%) of all web activity seen by the Android OS.

Assuming all Android users browse the web with the same level of relative frequency, the low level of Ice Cream Sandwich (Android 4.0) adoption presents a problem for Google. With a significant amount of time, effort, and investment necessary in the development of software, low levels of adoption make it much more difficult for businesses to ensure consistency across individual or multiple products. In the smartphone market, when consumers are running devices on outdated software, the dilemma evolves to not only just missing features and improvements, but security issues as well. The Android Market has also suffered to some extent because current OS fragmentation requires developers to target multiple versions of the OS to maximize market penetration.

Taking a look at top Android powered devices illustrates that after just one year, a majority are one or more major updates behind the latest version of the OS. In the most recent Chitika Insights Android OS fragmentation study, Gingerbread and Froyo (both updates to version 2.0) make up nearly 95% of total Android traffic. Adversely, in the case of iOS, every iPhone released thus far has the capability and support to update to the latest version of the OS within three years of the phones release. By transferring OS updates to consumers directly, circumventing manufacturers, Apple is able to ensure users are able to run with the latest and greatest version of their software, usually for free.

The implications of Android’s version problem will play out to a greater effect over the long term. The fragmentation of the OS presents a barrier for developers and the Android Market, through limiting their incentive and thereby choice for consumers. Fortunately, Google has been on top of this by releasing Android Design guidelines for Ice Cream Sandwich. Devices running the older operating systems are also unable to display the latest enhancements and features, which limits customer loyalty and satisfaction. Moreover, it is also worth to mention that older versions also pose a greater security risk. Stay tuned to future Chitika Insights studies focusing in on Android OS!

If you’re looking for a way to improve the usability of your Figma designs, Poll the People is the perfect solution. We offer a free signup so you can test your designs on our platform and get feedback from real users. With our easy-to-use interface, you can get started right away and make sure your designs are user-friendly. Don’t miss out on this valuable opportunity – sign up today!

iPad Still Leads Tablet Market for Web Traffic; How Does the Competition Stack Up?

Report: iOS Users Driven to Update by Features Rather than Security