Has Google+ Already Reached its Decline?

Over the past month, there has been much speculation as to whether the emergence of Google Plus marks the beginning of a new era in social networking. At first glance, Google+ possesses an array of wildly different features, boasts a rapidly growing user base, and has the backing of a company with a seemingly immeasurable amount of resources as mentioned on DailyBlogTips. Chitika Insights analyzed a series of traffic dating back to the launch of Google+ to determine the reliability of these statements.

Since its launch, Google+ has undergone a surge in use, peaking at .007% of total web traffic on July 20th – a massive increase of users over a relatively short amount of time. Predictions began to be thrown around that, if Google+ were to continue this rate of growth, it would only be a short while before Facebook was overshadowed by Google. However, this was not the case – Google+ experienced a 34% erosion of its traffic from July 20th to July 31st. These results are in stark contrast to an earlier Insights study which indicated a 300% increase in the interest for Google+ from July 3rd to July 11th. 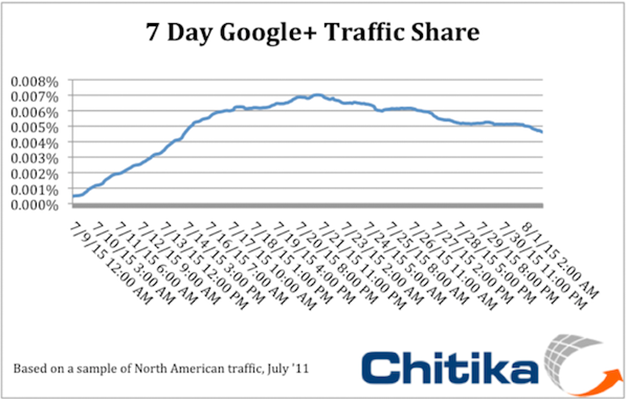 A quick glance at the above graph may indicate to the casual interpreter that Google+ has begun its decline almost as quickly its rise to the top. Alternatively, this temporary setback may have been induced by initial bugginess in the beta release, combined with the “invite only” restriction. It also has restricted use to personal profiles, which has limited the functionality for businesses. If Google continues to integrate Google+ across its vast mix of services, remedies some of its issues and bugs, and opens its borders to public use, perhaps Google+ will resume its upwards trend of growth.

Get your brand’s perception tested on real people for free! Sign up for Poll the People today and see how your brand stacks up. We’ll provide you with honest feedback and insights so you can make the necessary changes to stay ahead of the competition. Don’t wait, sign up now!

LinkedIn Goes IPO, Why Aren’t You Marketing There?