When Google acquired Android Inc. in 2005, many thought Google was making a risky endeavor into an industry unfamiliar to them. Flash forward to 2011—where Android is a dominant force in the mobile industry, and those initial concerns are now long forgotten whispers. According to a November report from Gartner, Android more than doubled its market share within a year, making it the hottest operating system in the mobile industry.

The Chitika Insights team wanted to examine the Android market in depth to see which version of Android has been a driving force in fueled growth. We investigated the share of traffic for each Android version in the total Android ecosystem, covering a sample of hundreds of millions of impressions over a week’s time. 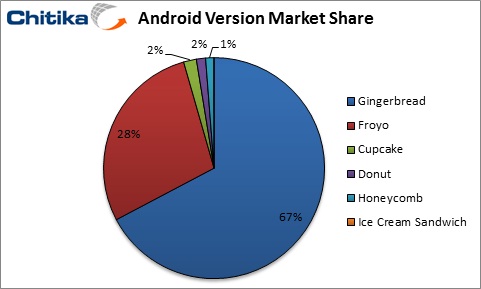 We found that versions, Gingerbread (2.3) and Froyo (2.2) dominate all other Android versions. Together, they make up nearly 95% of total Android traffic in our network. Gingerbread is the real standout dominating the market with a 67% share. This makes sense because Gingerbread is the most recent version on mobile devices. Froyo, the version released just prior to Gingerbread owns 28% of the Android market. Although Honeycomb is a more current version than Gingerbread, it’s only available on smart tablets. Our servers see a much higher share of mobile phone traffic than we do smart tablets, (though they are gaining). The fact that Gingerbread and Froyo make up so much of the Android market, while older versions Cupcake(1.5) and Donut (1.6) only have a 4% share, is proof that Android users are very quick to update their mobile devices to the latest versions.

Interestingly, we were able to see impressions from Android’s upcoming version, Ice Cream Sandwich (4.0), which is currently available to developers. Because Ice Cream Sandwich has yet to be released to the general market, the share remains small but does show up on our pie chart.

As a publisher, it has become increasingly important to understand the distribution of your markets demographics to best optimize your site. This includes different versions of mobile and desktop operating systems, but can also be traced back to real world data points such as location. Truly understanding the way your site works and who is visiting it is one of the key pillars in terms of maximizing revenue.

Insights will rehash this study upon the release of Android’s Ice Cream Sandwich, to see exactly how quickly users adopt the hottest operating system’s newest releases.

Looking to create a CTA button that actually works? Look no further than Poll the People. Our free signup allows you to test your buttons on real people to see what works best. So why wait? Sign up today and see the results for yourself!

Shopping Goes Mobile in Time for the Holiday

What If AT&T and T-Mobile Actually Merge?