Firefox 6 Takes Off, up to Over 8% of Traffic

August 16th saw the release of the newest version of Firefox; Firefox 6, and already the browser is taking off with rave reviews. The second version released under Mozilla’s new rapid-release process, Firefox 6 has seen a huge bump in our network since release day.

To quantify the spike of traffic, Chitika took a look at all USA and Canadian traffic from August 16th to August 22nd, and took a look at the hourly growth of Firefox 6 as a function of both overall traffic, and just Firefox traffic. As a share of all traffic, a clear story is told: 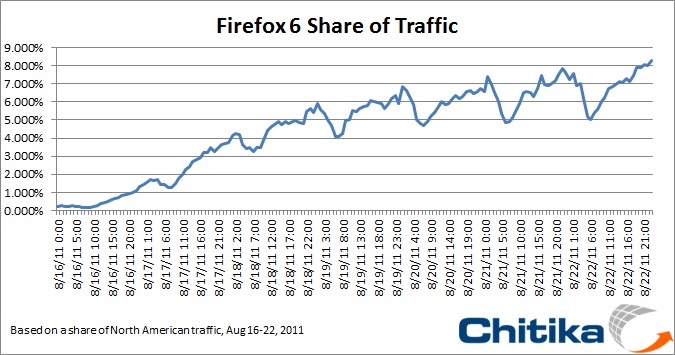 Clearly, Firefox 6 is growing, already consisting of just over 8% of our total traffic by the end of the day on August 22nd. Also of note, though, is the periodic growth of Firefox 6: peaks tend to occur at the beginning of each day, and valleys occur at the early morning hours when Internet Explorer is primarily in use. Looking at Firefox 6 as a share of all Firefox traffic, though, shows that the valleys are not all the result of IE: 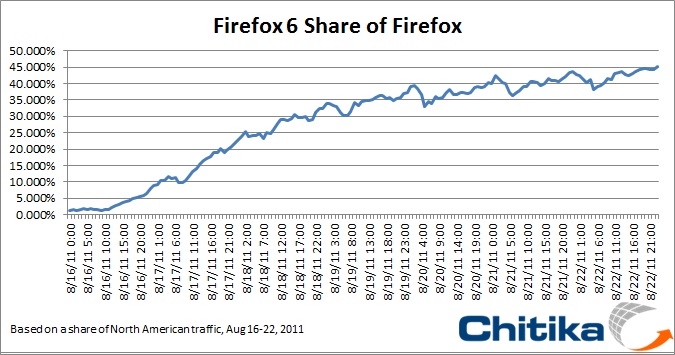 While not as pronounced, peaks tend to occur at the end of days, while early morning is the worst for Firefox 6 growth. Clearly, downloads are occurring more often after work.

Also of note, while Firefox 6 already consists of approximately 45% of Firefox traffic, the growth rate has slowed drastically, signifying that the early adopter crowd have already started using the new browser. Has Firefox 6 already hit its market ceiling?

Check back with Chitika Insights for more insights on web traffic.

Looking to test your ad descriptions on real people? Poll the People offers a free signup to test your ads and get feedback from our panel of consumers. With our easy-to-use platform, you can create a poll in minutes and get results fast. So why wait? Sign up today and see how Poll the People can help you improve your advertising.

Steve Jobs: The End of a Legacy

Internet Explorer 6, Alive By The Hand of IT Departments