In the latter part of August, Digg and Reddit spent most of their time sending about the same amount of traffic to sites in the Chitika network.  Since Digg 4’s launch on the 25th, however, Digg’s traffic has dropped off significantly, while Reddit’s has risen.  Some of this can be attributed to Reddit’s well-publicized assault on Digg’s front page, making the most coveted spots on Digg link to Reddit content. 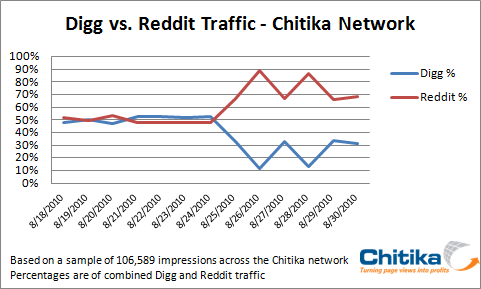 Here’s how the Digg/Reddit split has looked since the 18th, based on a sample of traffic across our network:

With Reddit’s assault on Digg combining with many Digg users’ vocal disapproval of the new version, it seems that the site has a ways to go if they want to return to their position as the preeminent traffic-generating news site.

Looking to create more effective call-to-action buttons? Poll the People is here to help! Our platform makes it easy to gather feedback from your target audience, so you can create CTA buttons that are sure to convert. Best of all, our service is free to try. Sign up today and see how Poll the People can help you boost your conversion rates.

The 2% Rule For Conversion Rate Optimization

The Educated are Harder to Advertise To