Chromebook Struggles To Make its Mark

With the release of Google’s next-generation Chromebook, the Samsung Series 5 550, the company is all set to provide its users with a whole new personal computing experience. Google’s OS focuses on saving a major amount of data within the cloud, running web applications from there, while saving little data to local storage. With this innovation-driven product, Google’s goal is to fundamentally change how we think about laptop computing.

But the numbers tell an altogether different story. It’s been almost a year since the Chromebook was launched, but the actual Web usage market share of Chrome OS still seems to be extraordinarily low. Chitika Insights conducted a study, ranging from June 7 to June 13, 2012, on the Internet usage share of Chrome OS, comparing it with that of other operating systems. User agent analysis was used to aggregate hundreds of millions of impressions across various operating systems and achieve the following graphical results: 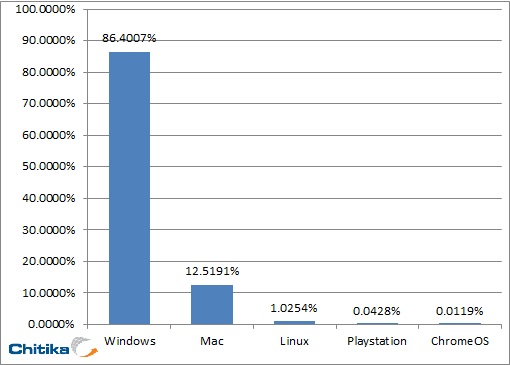 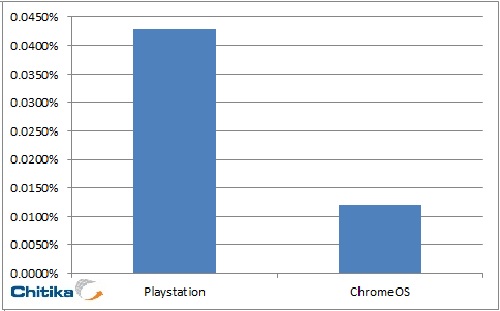 It shows a mere .0119% usage share for Chrome OS, quite unimpressive for a year-old, Internet-centric product. Even a gaming console like PlayStation has a usage share of .042% which is approximately 4 times that of Chrome OS. These figures clearly depict that Google has a long way to go as far as the operating system market is concerned, and with its present pace, competing with giants like Microsoft and Apple will be a daunting task for the company.

With Chromebook being more Internet dependent, its scope seems to be limited to the users who completely rely on the Web, rather than local projects. Despite increased usage, personal computing has not reached dimensions such that it can be called ‘completely Internet based.’ Today’s users do not want their computers to be largely just an expensive paperweight when they are offline. Therefore, a highly specific and targeted customer segment may be one of the prime reasons for Chrome OS’ low market share. Moreover, this data is an obvious hint to online advertisers and publishers regarding which direction to focus their marketing campaigns.

If you’re looking for a way to get your voice heard, Poll the People is the perfect platform for you. We offer a free signup so you can test our platform and see how easy it is to use. With our easy-to-use interface, you can create polls and surveys to get the feedback you need from your customers. So what are you waiting for? Sign up today and get started!

Galaxy Note II off to Hot Start on T-Mobile, Sprint

What If AT&T and T-Mobile Actually Merge?