On June 28th, Google announced the availability of its web browser, Chrome, on iOS 5, which over time may serve to shake things up. Until now, Safari has seen little to no competition from any mainstream browsers in the iOS environment. While iOS users do have alternate ways of surfing the internet, be it through an app or Facebook referrals (to name a few), Safari has experienced an effective monopoly in the iOS browser market. With the introduction of Chrome on iOS, Safari now has a legitimate competitor in the mobile browser market (which is always good for consumers). After its initial release, Chrome for iOS held a top position in the rankings for free apps in the iTunes market and continues to post moderate levels of growth.

Chitika Insights has been tracking the launch and adoption rate for the new Chrome for iOS browser to determine how much share they are taking from Safari for iOS, and how quickly. Our latest Live Tracker has just been launched, with the purpose of measuring Chrome for iOS adoption rate in real time.

The main pie chart featured on our Chrome for iOS Adoption Tracker shows current shares of browser usage on iOS 5. The three fragments we are analyzing include; Safari, Chrome, and “Other” (comprised mostly of app traffic), as seen below. (Note: Image below represents data on July 17, 2012) 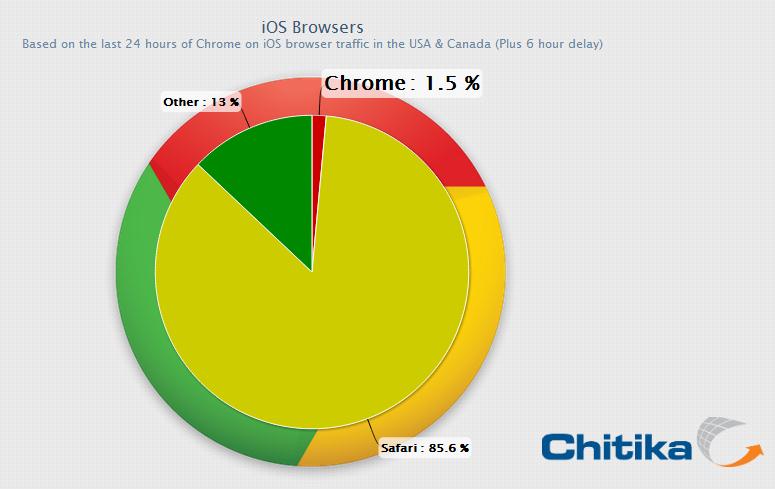 Directing your attention below we have highlighted a few interesting data points revealed by the tracker as of July 17, 2012:

The second element of our tracker analyzes historical browser usage for iOS. With this dynamic chart, we can infer Chrome’s adoption rate in real time (with a six hour delay to ensure the accuracy and integrity of the data).

In addition, users can filter out individual browsers to get a more specified perspective of a browser’s recent activity.

A few insights pulled from the trackers historical data include:

If Google Chrome’s share of web traffic continues to grow on iOS, it will be particularly interesting to see if it cannibalizes share from other browsers, or starts cutting into Safari’s lead. Will Apple respond to this new competitor by introducing new features to their Safari mobile browser and making other long sought after improvements? With this new tracker, we will now be able to see whether Chrome on iOS is a contender or a pretender, as well as what effect it will have on the overall market – in real time.

A full methodology for the tracker can be found here: https://insights.chitika.com/2012/chrome-for-ios-adoption-tracker-methodology/

Looking to create a CTA button that actually works? Look no further than Poll the People. Our free signup allows you to test your buttons on real people to see what works best. So why wait? Sign up today and see the results for yourself!

Study: PlayBook OS 2.0 Running on 43% of Eligible Devices after One Week in Market

WebOS Coming To The PC? What?

Study: Apple iPad Accounts for 94.64% of all Tablet Web Traffic