The advent of increasingly versatile mobile devices has given consumers a wider range of options with which to access the Internet. The rise of smartphones and tablets are slowly changing the face of Web market share. In our latest live tracker, Chitika Insights is measuring just how these methods of Internet access are changing, by examining traffic share among smartphone, tablet, and PC users.

In the first pie chart, we look at Web traffic market share broken down by different types of devices – desktops, smartphones, and tablets. Below, we’ve cataloged some highlights from these figures as of 10:30 a.m. ET on  June 25:

The following smaller three pie charts break down the share of operating systems on each device type. 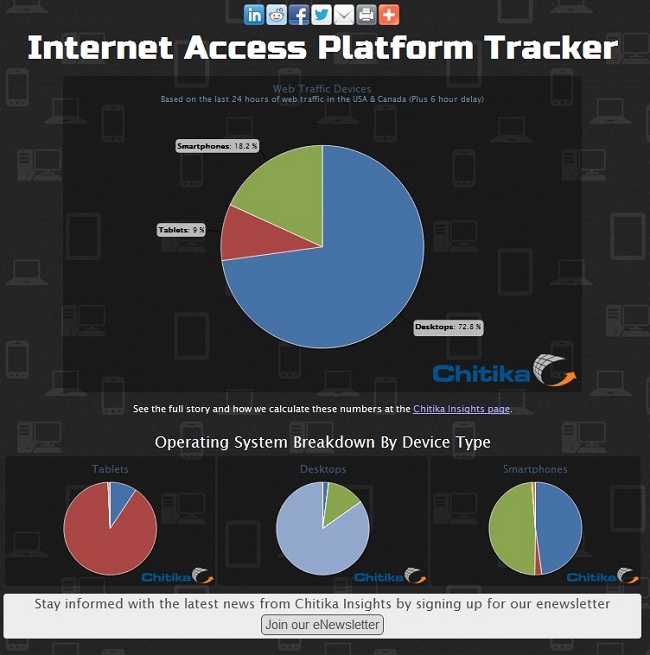 The last piece of this tracker shows hourly representation of tablet, smartphone, and desktop traffic. Through this graph, the relationship between use of devices and time of day is easily visualized. Looking at historical data for these devices highlights some distinct trends in Web usage. The periodicity of the graph shows routine spikes in mobile traffic – smartphones and tablets alike – during evening hours. The hours of 7 pm through midnight, EST, are routinely the hours that show the largest rise in mobile traffic. Additionally, weekend days show generally higher mobile usage all throughout the day, though they still exhibit the same evening peaks – an unsurprising trend, as consumers have greater access to Web-capable devices during the times in which they are most likely to be away from their computers. PC usage displays the opposite trend, peaking in the mornings from about 8am through noon and dropping off somewhat over the weekends.

This data can be a very valuable tool for advertisers and publishers. By keeping aware of consumer trends, businesses can optimize their strategies to stay in tune with the patterns of Web users.

Be sure to take a look at the latest numbers by checking out the full live tracker at: http://labs.chitika.net/webplatforms

Sign up now for a free Poll the People account and get started on optimizing your CTA phrases today! With our easy to use tools and usability testing, you’ll be able to increase your conversion rates in no time!

Study: iOS Users Click on Ads 33% More than Android; CTR up 10% Since April

UPDATE: iOS 6 on 25% of iOS Devices 48 Hours After Public Release

Report: Future of Firefox Unclear; 25% of Users Lag Behind in Version Updates